Skip to main content
This site is in alpha, a long time work-in-progress, structure and some audio content coming first, with lots more in store. NoScript users: enable local JS for Updates column reflow!
Developers: the Quarterly Release Pact happens again on April 15th! Come chat about it in #lad. Users: is your favourite software missing? Submit it! Release bot and chat in #libreav

EmissionControl2 (EC2) is a new standalone interactive real-time application for granular synthesis and sound file granulation. It is available for OSX, Linux, and Windows. 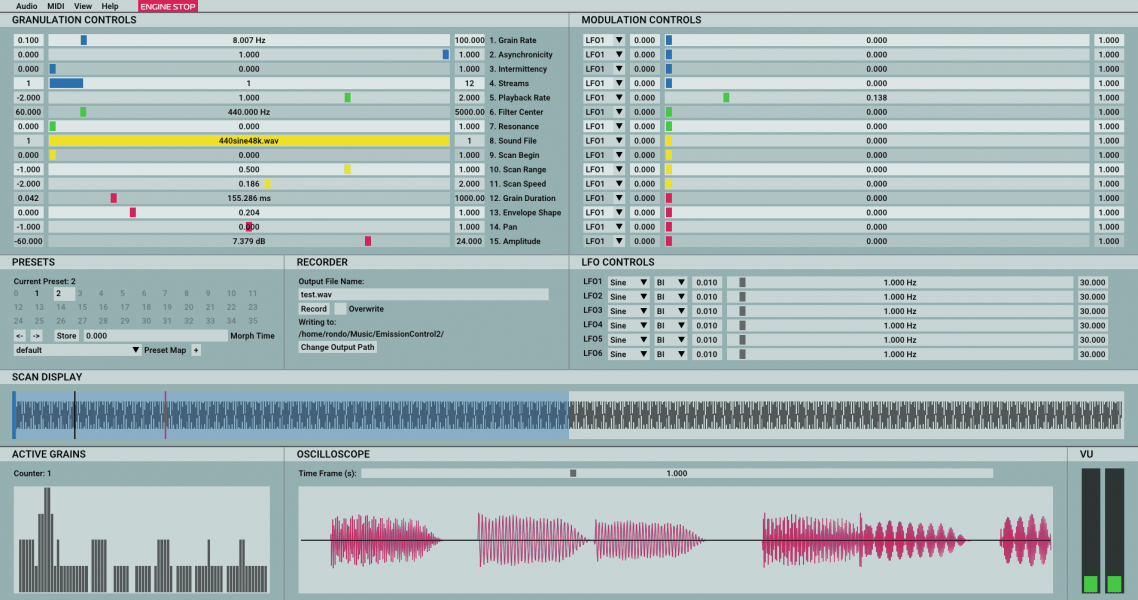 SonoBus is an easy to use application for streaming high-quality, low-latency peer-to-peer audio between devices over the internet or a local network.

Simply choose a unique group name (with optional password), and instantly connect multiple people together to make music, remote sessions, podcasts, etc. Easily record the audio from everyone, as well as playback any audio content to the whole group.

Connects multiple users together to send and receive audio among all in a group, with fine-grained control over latency, quality and overall mix. Includes optional input compression, noise gate, and EQ effects, along with a master reverb. All settings are dynamic, network statistics are clearly visible.

Works as a standalone application on macOS, Windows, iOS, and Linux, and as an audio plugin (AU, VST) on macOS and Windows. Use it on your desktop or in your DAW, or on your mobile device.

Easy to setup and use, yet still provides all the details that audio nerds want to see. Audio quality can be instantly adjusted from full uncompressed PCM (16, 24, or 32 bit) or with various compressed bitrates (16-256 kbps per channel) using the low-latency Opus codec, and you can do this independently for any of the users you are connected with in a group. 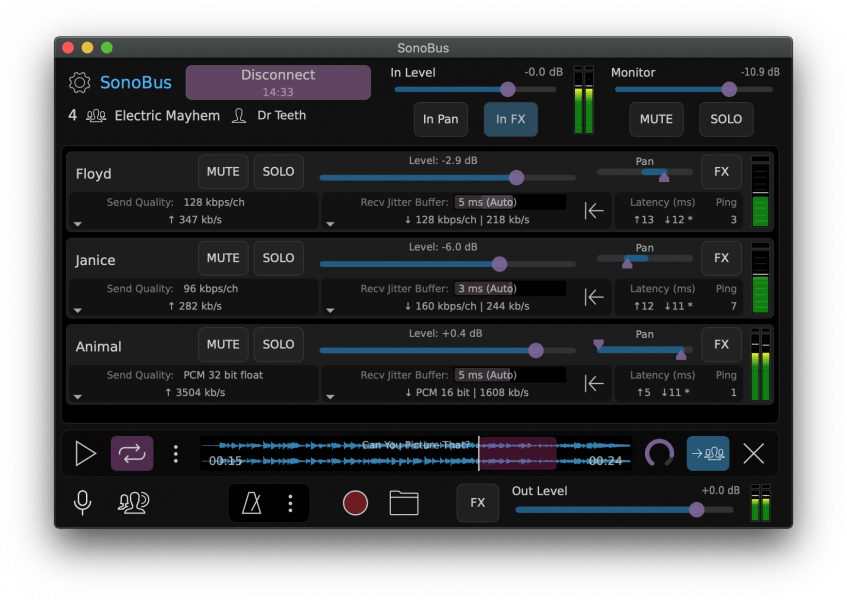 Cadence is a set of tools useful for audio production, developed by falkTX using Python3 and Qt5 and some C++. The tools share the same base source code, so most of them look quite similar (which is intentional).

Cadence-JackMeter - Digital peak meter for JACK. It automatically connects itself to all application JACK output ports that are also connected to the system output.

Cadence-JackSettings - Simple and easy-to-use configure dialog for jackdbus. It can configure JACK's driver and engine parameters, and it also supports LADISH studios.

Cadence-Logs - Small tool that shows JACK, A2J, LASH and LADISH logs in a multi-tab window. The logs are viewed in a text box, making it easy to browse and extract status messages using copy and paste commands.

Cadence-Render - Tool to record (or 'render') a JACK project using jack-capture, controlled by JACK Transport. It supports a vast number of file types and can render in both realtime and freewheel modes.

Cadence-XY Controller - Simple XY widget that sends and receives data from Jack MIDI. It can send data through specific channels and has a MIDI Keyboard too.

Catarina - A Patchbay test app, created while the patchcanvas module was being developed. It allows the user to experiment with the patchbay, without using ALSA, JACK or LADISH. You can save & load patchbay configurations too.

Catia - JACK Patchbay, with some neat features like A2J bridge support and JACK Transport. It's supposed to be as simple as possible (there's Claudia for advanced things), so it can work nicely on Windows and Mac too. Currently has ALSA-MIDI support in experimental stage (it doesn't automatically refresh the canvas when changes happen externally).

Claudia - LADISH frontend; just like Catia, but focused at session management through LADISH. It has a bit more features than the official LADISH GUI, with a nice preview of the main canvas in the bottom-left. It also implements the 'Claudia-Launcher' add-application style for LADISH.

Claudia-Launcher - A multimedia application launcher with LADISH support. It searches for installed packages (not binaries), and displays the respective content as a launcher. The content is got through an hardcoded database, created and/or modified to suit the target distribution. Currently supports Debian and ArchLinux based distros. 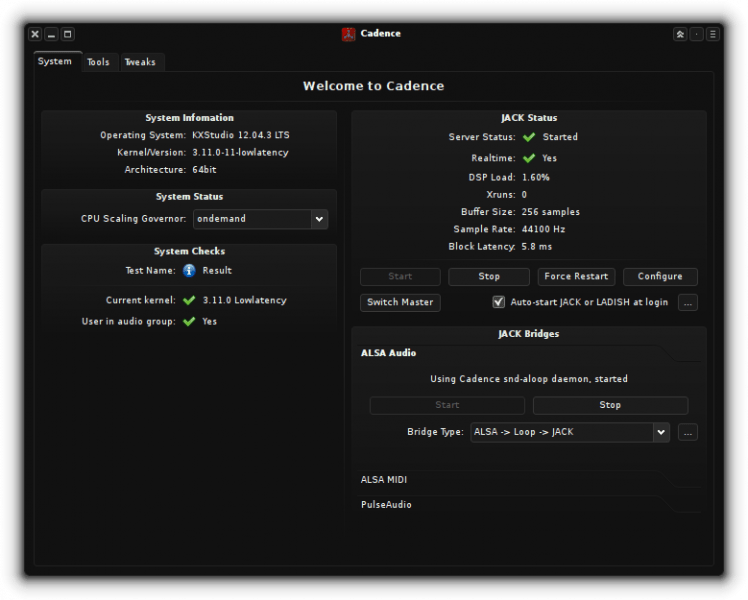 Jamulus enables musicians to perform real-time jam sessions over the internet. There is one server running the Jamulus server software which collects the audio data from each Jamulus client, mixes the audio data and sends the mix back to each client. 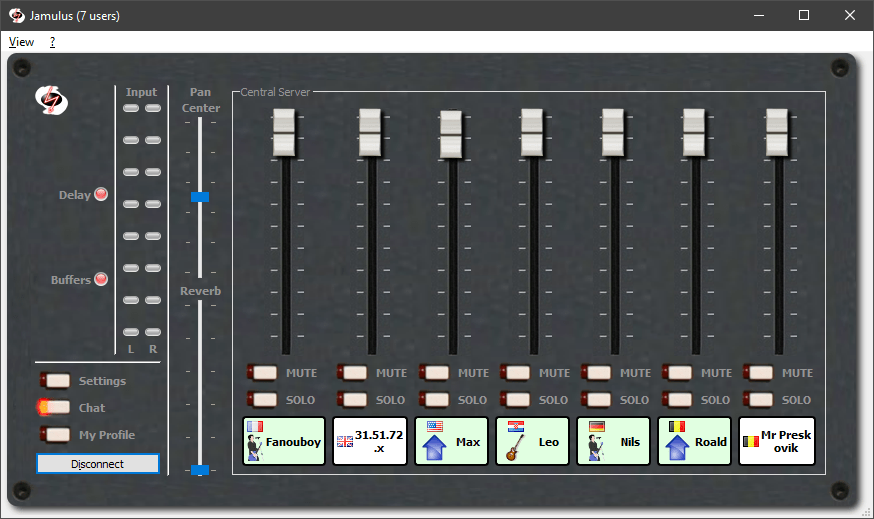 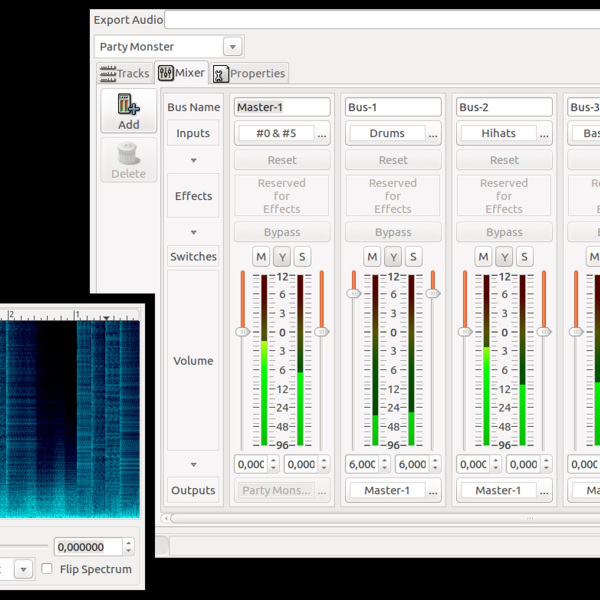 LNX_Studio is a Digital Audio Work Station created in the SuperCollider language. It has a powerful set of tools for creating music, all of which can be networked. Co-location gigs or real-time collaborations don't have to be in the same room. 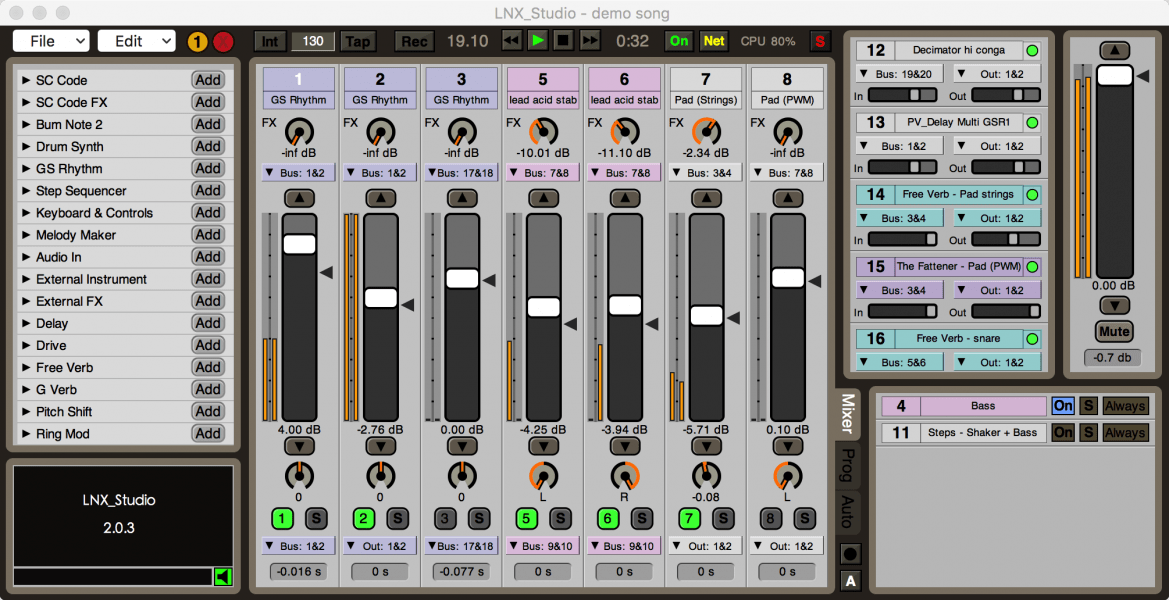 jack_mixer is a GTK+ JACK audio mixer app with a look & handling similar to hardware mixing desks. It can mix multiple JACK audio streams and has lot of useful features like NSM support, channel reordering, K-meters, and MIDI Control Change messages (CCs) can be used to control volume, balance/panorama, mute, and solo of input and output channels.

Zrythm is a digital audio workstation designed to be featureful and easy to use. It allows limitless automation through curves, LFOs and envelopes, supports multiple plugin formats including LV2, VST2 and VST3, works with multiple backends including JACK, RtAudio/RtMidi and SDL2, assists with chord progressions via a special Chord Track and chord pads, and can be used in multiple languages including English, French, Portuguese, Japanese and German. 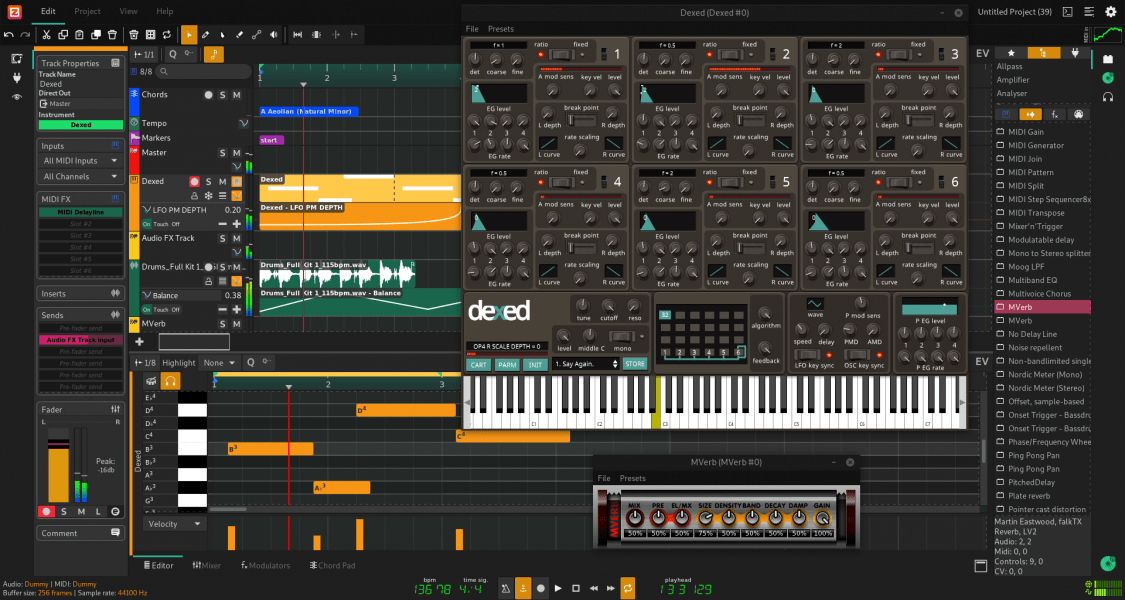